One convenient method is to check what happens if the output voltage happens to fluctuate by a little bit above the desired output; when this change occurs and propagates back to the input of the op-amp, does it cause the output to come back down to the desired level? If so, the system is in negative feedback.

Digital-to-Analog Converter: Component that takes in digital signals (bits) and translates them into output analog voltages.

To distinguish, we will use the following symbol to represent time-varying voltage signals:

Loading: an electrical component or portion of a circuit that consumes (active) electric power

Buffer (amplifier): provides electrical impedance transformation from one circuit to another, with the aim of preventing the signal source from being affected by whatever currents (or voltages, for a current buffer) that the load may be produced with 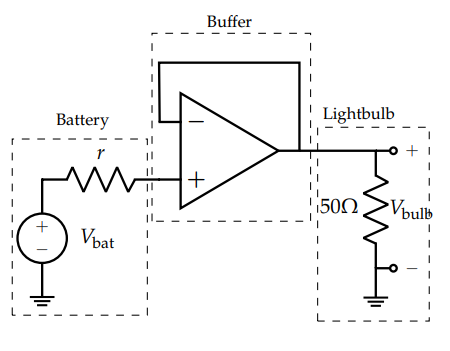 Concretely restate the goals for the design.

Describe your strategy (often in the form of a block diagram) to achieve your goal.

Implement the components described in your strategy.