Tolerance limits on pin and hole spacing need to be specified

Example: hole in a block #

Surfaces are not smooth in a real part, so we measure the hole center from the datums $A,B,C$ 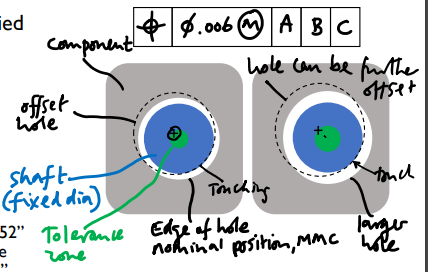 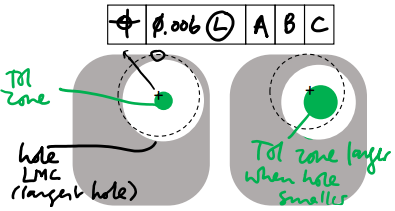 1 Straightness of an edge, or a line on a surface (top) #

2. Straightness of an axis (bottom) #

All points on the indicated surface must lie within the tolerance zone, considered simultaneously

Profile tolerances: with vs without datum #

Yellow shows looser tolerance zone without datums; just says that the line’s/surface’s shape has to fit the tolerance – not that that surface itself has to be constrained by it’s to fit with other parts

While form tolerances dictate the required “quality” of a single feature, and profile tolerances may or may not be anchored to a particular datum or datums, orientation tolerances inherently require the use of datums, because they are about relating one feature to another. We need to establish a datum to represent one feature before we can determine how the second feature relates to it. Orientation tolerances are as follows.

When the toleranced feature is an axis, we specify a cylindrical tolerance zone with a particular diameter — this tolerance zone is, however, constrained to be parallel to the datum, which differs from a simple straightness tolerance.

Axis perpendicularity: all points on the axis must lie within a cylinder with the diameter of the tolerance zone and perpendicular to the referenced datum

Note that an angularity tolerance of this kind is rather different from a “traditionally” defined angular tolerance, which would place a range on the effective angle between two features (as shown in the left above). In the traditional approach, the tolerance zone gets wider as the distance from the intersection point between the two features increases. Depending on what the component is supposed to do in use, one might argue that either the traditional approach or the GD&T approach would be the more useful way of tolerancing an angled feature. For example, if the component is intended to serve as a wedge to set the angle between two flat components, the traditional tolerancing approach might work best. On the other hand, if the component is supposed to be a mirror on to which a plane-wave of light is incident, we might rather use the GD&T approach so that the local angle of the surface is kept within certain bounds all the way along its length. The designer needs to think carefully about exactly what manufacturing defect is to be avoided

In some components, one feature is intended to be centered relative to another, and a symmetry tolerance defines how far those two features can deviate from symmetry. Here when we say “feature” we refer to opposing pairs of surfaces with equal size — a particular type of feature known as a feature of size. The opposite sides of the slot above constitute a feature of size, as do the opposite outside faces of the component itself. As shown above, one feature is specified as a datum (by labeling one side of the feature with a lettered symbol). The other feature is labeled with its nominal dimension and also with a feature control frame that contains the symmetry symbol, the size of the tolerance zone, and the relevant datum. The tolerance zone tells us how far the midplane of the toleranced feature can deviate relative to the midplane of the datum feature (which would be established by measuring points on both sides of the feature — i.e., the height of the component in the example

Runout tolerances differ from both circularity/cylindricity and concentricity tolerances in that they constrain peak-to-peak deviation of the surface of one feature when it is rotating about a datum axis. (No fitting of bounding circles or cylinders or of effective central axes is required.) Runout tolerances are thus helpful for tolerancing components that must rotate relative to other components while maintaining a certain amount of clearance — for example, a shaft turning within a cylindrical cavity. Runout is also important for ensuring cutting tool performance — in a milling tool or drill for example, limiting runout enables clean cuts to be made, as the tool will not periodically collide with the workpiece.

A circular runout tolerance limits the peak-to-peak deviation of points on any given circumference of a cylindrical feature, when it rotates about the specified datum axis. In the example shown on above, for example, circular runout could be measured by clamping the component in a chuck to establish datum A, then rotating the component with a dial gage in contact with the toleranced feature. The peak-to-peak movement of the indicator would need to be less than the tolerance specified. A circular runout tolerance must be satisfied independently at any circumference on the cylindrical feature to which it applies (not just the location at which the tolerance arrow appears to point).

This is the “3D” version of circular runout: the datum is established, and the component rotated, and the total peak-to-peak variation across all axial positions is found (e.g. by scanning a dial gage along the component as it rotates). Total runout will usually be larger than circular runout; the example below illustrates why: